Menu
Live Stream feed will return Working on making stream system better, hope to have it back soon! - Nick

It all started at Connecticut school of broadcasting “in an empty room” and has developed into the most dangerous radio show on the internet, armed with weapons of mass discussion. Tackling the hot button topics or chatting it up with the biggest stars (and even the smallest ones too!) in the entertainment industry or having a vuvuzela go where its never been before! It’s raw, it’s edgy, It’s completely Uncensored, it’s The Ham Radio Show. Finocchiaro’s irreverent new Saturday night talk show — titled “Ham Radio,” an apparent tribute to amateur broadcasters as well as his own antics — broadcasts everything in what he’s dubbed a “mens’ magazine” format. From discussions of bizarre current events, to attaching Tasers to young producers’ nether regions on the air, Uncle Eddie and company are out to push the boundaries of good taste.

Call them shock jocks, call them completely inappropriate — but Uncle Eddie and his “Ham Radio” cohorts, are making a bid for something big”
Click Here to Read Full Article

Though he arguably helms the gold standard in unexpurgated radio talk, it should be noted that Howard Stern is not the only person delivering radio with an edge.

Be he spinning around the politics of the day or interviewing adult stars, Eddie Finocchiaro gives forth across his program — “The Ham Radio Show” — with wicked aplomb. One can peruse Ham Radio show’s website to gander at the “Spank Bank of the Week” model, as well as listen to the two-hour program that would pretty much make anybody blush…. Truth: We’re blushing, too. 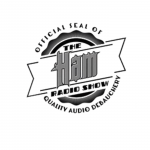